Death by a thousand treaties 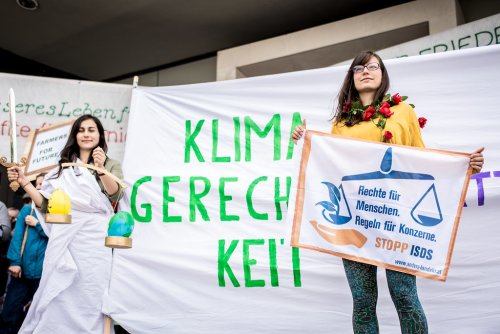 Death by a thousand treaties

Leaving fossil fuels in the ground is a key requirement to limit global warming to 2°C, according to climate scientists.

The majority of European parliamentarians recently joined the call for fossil fuel phase out. Yet, most governments are failing to implement an energy transition.

This is taking place when, instead, states should be banning new permits for the exploration or extraction of fossil fuels, limiting or rescinding existing licenses, cutting subsidies to coal, gas or oil; or taxing its production.

Many factors deter government action to tackle the fossil fuel industry. But there is one obstacle that is rarely talked about: International investment treaties, in particular the Energy Charter Treaty (ECT), are powerful weapons for fossil fuel corporations.

They enable them to attack any climate measure that could reduce their profits, even those enacted to deal with the social and ecological crisis.

How are fossil fuels investors using investment agreements to prevent an energy transition?

Big oil, gas and coal companies can bypass national legal systems. Instead, they can use a web of over 2,600 international investment treaties to sue States for billions of dollars in “damages” at international arbitration tribunals if governments move to shut down or restrict the profits of fossil fuel projects.

Amandine Van Den Berghe, an environmental lawyer , summed up the problem: “Fossil fuel companies may seek to use ISDS to shift their losses from stranded assets onto states and seek unmerited compensation for poor business decisions.”

The Energy Charter Treaty is the world’s most dangerous investment agreement, due to its wide geographical reach and its extremely broad and generous investor privileges.

Created in the 1990s to protect foreign investors in the energy sector, it has since been used in 131 cases by investors to sue States.

Several of these lawsuits were initiated by fossil fuel companies attempting to undermine governments’ efforts to fight climate change.

In 2017, Italy was sued by the British oil and gas company Rockhopper after cancelling its concession to drill oil in the Adriatic Sea.

This followed a decade of struggle by Italian coastal communities who denounced the danger of coastal drilling, which had already caused earthquakes and threatened new ecological disasters.

The oil company is using the Energy Charter Treaty to demand 300 million euros in compensation - seven times the amount the company initially invested.

This case, like the 1,000 other investment treaty lawsuits24 known about worldwide, will be decided by three private lawyers acting as arbitrators.

These arbitrators tend to defend private investor rights above public interest,25 revealing an inherent pro-corporate bias. Their decisions are binding and immediately enforceable.

Arbitrators’ rulings usually ignore the public interest concerns motivating the government’s intervention, or the fact that the companies may well have been fully aware of the risks when they invested.

Canadian oil and gas company Vermillion, which extracts almost 75 percent of all French oil, used the threat of an ECT lawsuit to dissuade the French government from legislating to phase out fossil fuel extraction. The law was shelved and replaced by a watered-down version which continues to allow it.

More recently, German coal giant Uniper threatened to sue the Netherlands for up to €1 billion over a new law banning the use of coal for electricity production by 2030.

The threat was made when the law was being discussed by the Dutch Parliament. Even though the threat didn’t stop the proposal becoming law, the intent to chill legislation was clear - and the company might still follow through.

In an era of climate crisis, it is almost inconceivable that governments are still subsidising dirty energy.

Yet, if they start to cut subsidies to coal, gas or oil, it is likely that States will see an avalanche of invest- ment lawsuits. Spain has been sued 47 times over cuts to renewable energy subsidies. Cuts to subsidies of any type of energy could unleash the same result.

The costs of investment lawsuits run into billions of US dollars and could bring the budgets of most countries, particularly in the Global South, to breaking point.

By the end of 2018, States worldwide had been ordered or agreed to pay investors a staggering USD$88 billion due to ISDS cases. This money could otherwise have been spent on climate adaptation and funding energy transition.

To put this in perspective, the Adaptation Fund, one of the main multilateral climate funds, has committed to USD$ 720 million for different projects since 2010. This is less than one percent of what governments had to pay foreign investors as a result of ISDS cases.

The short answer is no. There are many other legal instruments that could support an energy transition - we don’t need investment treaties, even reformed and improved ones.

Yet, years of research and ample experience has shown that IIAs are not a determining factor in the attraction of FDI, including clean energy investment as is claimed nowadays. So, all that remains for States is the risk of being sued.

IIAs only protect foreign investors. They don’t include any obligations, and only investors can initiate lawsuits. In particular, they protect large transnational corporations.

Governments in India, Morocco and even the Southern African Development Community (SADC) have promoted “alternative” models of investment agreements.

But while these new treaties might reduce the risk of being sued, they do not alter the nature of investment agreements and could still hinder governments’ efforts to address climate breakdown.

Investment protection treaties are not just shields that protect the fossil fuel industry, they are powerful swords that empower them to attack governments trying to act on climate change.

The international investment regime is not compatible with an energy transition or a green new deal. Keeping it in place will only extend the fossil fuel era.

The solution to predatory investment treaties is not better agree- ments that “reduce” the risk for States. The solution is for governments to follow the example of South Africa, Indonesia, Ecuador, Italy or even all EU member States.

They must urgently terminate all international investment treaties in force, in particular the Energy Charter Treaty, and stop negotiating new ones.

Only then will governments be able to phase out fossil fuels and truly advance a green new deal without the risk of having to spend millions of euros compensating corporations.