Corporate courts vs the environment 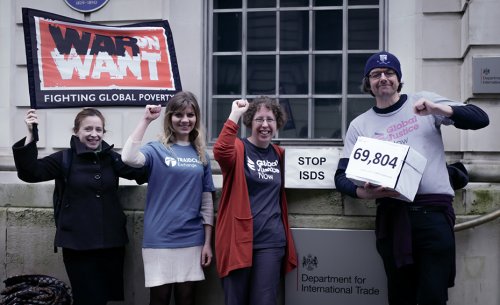 Corporate courts vs the environment

Any day now, Italy expects to be ordered to hand millions of dollars over to an oil exploration corporation, following the Italian government’s decision to ban such exploration off its coast.

The ruling will be handed down not by a judge in anything approaching a normal Italian or European court, but rather by a secretive arbitration process open only to big business, with Italy having no right to appeal. These “corporate courts” stem back to the 1950s, created by rich countries and oil multinationals to protect Western interests against the decolonisation sweeping the world at that time.

Italy’s decision to ban oil exploration came after Italians, fearing the impact of oil drilling off the beautiful Adriatic coast, protested in their thousands. They won. In December 2015, Italy’s parliament banned oil and gas projects within 20km (12 miles) of the coast.

That’s when British company Rockhopper, which has been exploring that same coast, sued Italy using an arbitration clause in a trade and investment agreement known as the “investor-state dispute settlement” or ISDS. The “compensation” being claimed totals about $350 million – seven times what the corporation invested in the exploration project. Worse still, it is being brought under an investment deal that Italy is no longer even a part of. But, as so often with such agreements, Italy is still bound by the terms of the ISDS system for 20 years after its exit.

In essence, ISDS creates a “corporate court”, allowing multinational corporations from a trade partner country – in this case Britain – to sue a government in a tribunal for any law or regulation they regard as unfair. These cases are often heard in secret, overseen by corporate lawyers who don’t have to worry about the impact of their decisions on society, human rights or the environment – only investment law. These “courts” usually have no right of appeal, and they can only be utilised by foreign investors.

Recently two energy corporations – RWE and Uniper – challenged the Netherlands over that country’s plans to phase out the burning of coal for electricity by 2030. Both corporations run coal-fired power stations in the country and are claiming billions of dollars in compensation, in a case that will clearly make governments think twice before enacting the most important changes we currently need to deal with climate change – a phase-out of fossil fuel use.

Meanwhile, in North America, Biden’s administration is being sued after it announced it was cancelling a deeply controversial pipeline due to bring hundreds of thousands of barrels of tar sands into the US. Tar sands are one of the most polluting fossil fuels we possess, and parts of Canada have been turned into a desolate moonscape as it’s been extracted from the ground. Biden’s decision is right – we must stop exploiting tar sands. But the decision could cost him billions of dollars.

These corporate courts are not new, though their use is growing rapidly. Rich countries started inserting the system into trade and investment deals as long ago as the 1950s. And that’s important, because it gives us a clue as to what the purpose of these corporate courts originally was.

Nicolás Perrone has written a new book digging into the history of ISDS, and he finds that it was invented by oil industry executives precisely to protect their interests overseas. In the 1950s onwards, with governments in Africa, Asia and Latin America increasingly able and willing to stand up to the power of the US and Europe and make their economies work in their own national interest, the rich world was concerned. How could it protect its economic interests around the world, built up in an age of empire, from these new governments? How would oil corporations protect their ability to exploit global resources? As Perrone states “Decolonization was a risk to their business model.”

A flashpoint came in 1951 when Iran’s parliament voted to nationalise the country’s oil sector which was under the control of the Anglo-Persian Oil Company, a forerunner of British Petroleum. Iran’s Prime Minister Mohammad Mosaddegh was overthrown in a US-British coup. From this point, Britain started inserting corporate courts into investment deals with countries, replacing the increasingly difficult ‘gunboat diplomacy’ with a legal regime which served Britain’s imperial interests just as well.

While ISDS wasn’t extensively used in its early days, from the 1990s it was added to hundreds of deals. A legal industry built up around the system, finding ever more innovative ways of bringing a claim. And claims reached absurd levels – far beyond any investment the litigating corporation has invested in a project.

Business started claiming that any regulatory change which effected its long-term expectation of profit was essentially expropriation of its assets. Hedge funds even got in on the act, funding corporate court cases so they could keep going for longer, in the hope of wearing a government down and achieving a very profitable payout.

We now have enough cases on file to know just how serious a challenge these corporate courts are to our urgent need to halt climate change. Governments have been sued for placing a moratorium on fracking and for forcing power stations to improve their environmental standards. One tribunal ruled that the Canadian government had violated a corporation’s “rights” simply by carrying out an environmental impact assessment, a judgment that even one of the arbitrators said “will be seen as a remarkable step backwards in environmental protection”.

Corporations are also using this system to evade accountability for environmental devastation. Between 1972 and 1993, US oil giant Texaco (later acquired by Chevron) dumped over 30 billion gallons of toxic waste and crude oil into the Amazon rainforest in the northeast of Ecuador, in one of the world’s greatest ever environmental disasters. A legal case brought by 30,000 Indigenous and small-scale farmers found Chevron guilty of “extensively polluting” the region and ordered the corporation to pay $18bn in compensation.

In 2009, Chevron launched a corporate court claim, saying it had been treated unfairly, and the case involved corruption. In September 2018, the ISDS found in Chevron’s favour – overruling Ecuador’s domestic law, and demanding that Ecuador pay Chevron! Shell is now taking a similar case against Nigeria, attempting to overturn a compensation award for an oil spill dating back to 1970.

Not only does this system make it harder for governments to take the sort of action they desperately need to protect the planet, it actually maintains the profits of the most reckless parts of the fossil fuel industry. The power stations in the Netherlands were established long after it became clear that coal would need to be phased out. But corporate courts essentially made the decision to establish them risk-free for the company. Or take Rockhopper, suing Italy for its exploration ban. A financial analyst told the Guardian that a payout in the case would be “tremendously helpful” in funding a further oil exploration off the coast of the Falkland Islands.

In other words, these corporate courts allow corporations to make utterly irresponsible decisions without consequence. Fortunately, the backlash is well underway, with countries from Bolivia to South Africa to Indonesia ripping up bilateral trade deals that contain corporate courts, and refusing to sign new ones. Here in Britain, Boris Johnson’s government is one of the most gung ho in the world when it comes to ISDS, trying to insert corporate courts into every trade deal they sign. But he’s already been beaten in the Australian and New Zealand deals, where it seems ISDS has been dropped from the negotiations. Meanwhile, across Europe a major campaign is underway to force governments to withdraw from the Energy Charter Treaty, one of the most egregious corporate court systems, responsible for many of the cases referred to here.

There are less than 100 days to go until the UN climate conference – COP26 – meets in Glasgow. Whatever commitments delegates make there could be seriously undermined unless we change the way our global trade system works. Abandoning the corporate court system should be a top priority.