Novartis vs. Colombia: How Big Pharma sabotaged the struggle for affordable cancer treatment 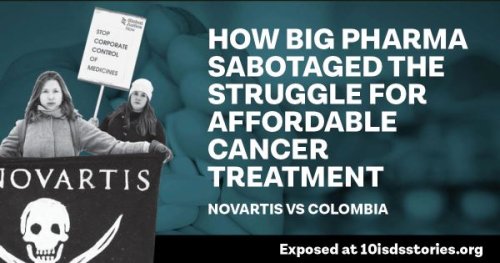 In Colombia, the high price of a life-saving blood cancer drug became unsustainable for the public health budget. The government decided, in 2015, to declare Glivec a medicine of public interest and strip pharma giant Novartis of its production monopoly, so that competition with generics would bring down the price of the drug. But Novartis was not ready to give up the goose that lays its golden eggs, and threatened to sue Colombia in an international arbitration tribunal. While the price for Glivec was ultimately reduced, the government no longer dared to touch Novartis’ monopoly. The company’s scare tactics averted a precedent that could have encouraged other countries to do the same, and reduced Novartis’ high profits worldwide.

Glivec (also known as Imatinib) is the drug that converted “a fatal cancer into a manageable condition”. Approved in 2001, it was dubbed a “magic bullet” for the treatment of leukemia, a deadly form of blood cancer. In 2015, the World Health Organisation added it to its list of essential medicines, which means these drugs should be available at all times and at a price that individuals and communities can afford.

But the price for Glivec did not allow for that. While the cost of producing the drug is estimated to be US$180 per year, it was sold at the extremely high price of US$19,819 per patient, per year (over 100 times the cost of production) in Colombia in 2014. This is almost twice the average annual income in the country.

Patients may have become the “financial victims” of the treatment success, having to pay the high price annually to stay alive. Over 100 experts in chronic myeloid leukemia (CML), a type of blood cancer, comment on the unjustly high prices of cancer drugs worldwide

Public budget bleeds as a result of high drug prices

One key reason for the high price of the medicine was the patent that Swiss pharma giant Novartis obtained in 2012 in Colombia. This meant that they could now quadruple the price of a 400 milligram tablet of the drug to US$43, whereas before, the locally produced generic medicine cost US$10.50.

For Colombia’s public health budget, the high-priced drug became unaffordable. It is estimated that between 2008 and 2014, the country spent approximatelyUS$200 million on the medication, bringing Colombia’s health system close to bankruptcy.

This is why, in 2014, a group of Colombian public health organisations requested the Minister of Health to declare Glivec a medicine of public interest and issue a compulsory licence. When a patented medicine becomes subject to a compulsory licence, the government effectively breaks the producer’s monopoly and grants other pharmaceutical companies the right to manufacture generic versions of the medicine, causing a drop in the price. Compulsory licences are an important flexibility recognised under the Agreement on Intellectual Property Rights (TRIPS) in the World Trade Organisation (WTO) and many other trade treaties. They have been used in particular by developing countries to increase access to life-saving drugs for diseases such as HIV.

Compulsory licensing is a key tool for protecting the financial stability of health systems and ensuring access to medicines and health services for all. 132 lawyers, academics and other experts who wrote to the President of Colombia supporting the actions of the government

The Colombian government decided to pursue this strategy and issued a compulsory licence. In parallel, it also attempted to directly negotiate a price decrease with Novartis, but the company refused outright. It was estimated that opening the Glivec market to generics would have reduced the high prices charged by Novartis by up to 77 per cent, translating into savings of around US$15 million per year for Colombia’s public health budget.

Arm-twisting at the highest level

But with global sales of Glivec hitting US$4.7 billion in 2015, Novartis was making record gains from this cancer drug, which accounted for 10 per cent of the company’s total revenue. It was thus determined to defend the goose that laid its golden eggs.

On 21 April 2016, Novartis sent a letter to the Colombian government, formally threatening to sue it in an international arbitration tribunal – unless the government reviewed its decisions in relation to Glivec.

Novartis claimed that Colombia had violated its bilateral investment treaty with Switzerland. More specifically, the company argued that the measures taken were unjustified and discriminatory, and that reducing the price of the medicine to the level of generics was equivalent to an indirect expropriation of the Glivec patent. Novartis also argued that the government had violated the company’s “legitimate expectations” of stable patent rules. The arbitration threat was echoed over and over again by powerful actors – including the CEO of Novartis, the US and the Swiss government. The US government also threatened to cut US$450 million of funding for the “Paz Colombia” peace process and to block Colombia’s efforts to join the OECD club of wealthy countries.

A compulsory licence is tantamount to an expropriation of the patent owner. Swiss government to Colombia’s Ministry of Health

The pressure worked. Less than a week after Novartis’ letter to the Colombian government, on 27 April 2016, the country’s Washington-based embassy recommended that the Ministry of Health take all measures necessary to avoid an investor-state lawsuit. And while the Ministry eventually declared that access to Glivec was of public interest, forcing a 44 per cent reduction of the price of the drug, the government dropped its plan to issue a compulsory licence.

When a commodity affects the lives or health of individuals, just price should prevail because of the moral implications. Examples include the price of bread during famines… Over 100 experts in chronic myeloid leukemia (CML) comment on the unjustly high prices of cancer drugs worldwide

Preventing the compulsory licence was what was most important to Novartis. The Colombian market for Glivec is only 1 per cent of Novartis’ global sales for the medicine, and thus is too small for a mere price cut to lead to huge losses for the pharma giant. But, in the context of ongoing increased global attention to, and critique of, the high costs of brand name pharmaceuticals for developing countries, the compulsory licence would have set a dangerous and worrying precedent for Novartis. Asked whether it was “true that Novartis is more worried about the signal this would give abroad than the impact in Colombia”, the company’s President of the Andean Region confirmed this analysis, replying: “Yes, because this is a global company and any country that takes a decision like this… is cause for concern”. Pharmaceutical companies like Novartis have systematically used their considerable financial resources to try to avert the use of compulsory licences around the world, according to research on 89 countries published by the World Health Organisation in 2018.

A strong… response to the plans of only a few countries to issue compulsory licences for cancer medications is likely to have a chilling effect on others. Researchers from the University of Groningen

It was a historic step that Colombia declared a patented medicine to be of public interest and succeeded in reducing its price significantly. However, thanks to its investment arbitration threat, Novartis reined in the possibility of a global precedent, and further steps to grant access to affordable medicines across the world.

Novartis’ legal threat to Colombia was not the first time, nor will it be the last time, that a big pharmaceutical company used international investment agreements to attack decisions to alter patent protections of medicines for public health objectives.

In 2013 Canada was hit with a US$483 million investment arbitration claim from US pharmaceutical company Eli Lilly, for invalidating patents for drugs to treat attention-deficit hyperactivity disorder (ADHD) and schizophrenia. Canadian courts had ruled that evidence provided by Eli Lilly did not support the therapeutic uses claimed, and the company’s response to the public interest ruling of the courts was to sue the country. In 2017, Ukraine settled a USD $800 million case with US company Gilead Sciences, after the government agreed not to break its monopoly, and not to allow the production of a generic equivalent to a hepatitis C drug manufactured by Gilead.

Researchers have warned that these cases mark “the beginning of an ominous and poisonous trend” of big pharma companies “proclaiming their ‘legitimate’ expectation of monopoly prices… to punish countries that attempt to use lawful flexibilities to assure more affordable access to medicines.” According to Professor Brook K. Baker from the Northeastern University School of Law, investment protection agreements are a genuine “booby-trap for access to medicine”.