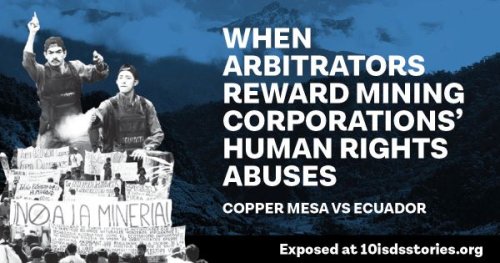 An ill-conceived mining project in one of the most biodiverse areas in the world. A Canadian investor that engaged in intimidation and violence towards the local indigenous population. A local community that vehemently opposed mining to save their forest, water sources and livelihoods. This is the story of a mining initiative that should have never been. Yet, after an investor lawsuit, three arbitrators decided that the government rather than the company should bear the blame for the failed project. In spite of acknowledging the many wrongdoings by the company, the arbitrators compensated the investor with a US$24 million payoff.

Intag, a region in Ecuador that is part of the Andean cloud forest belt, is so biologically diverse (being home to animals including jaguars, spectacled bears and spider monkeys)1 that it was categorised as one of the 36 recognised biodiversity hotspots around the world. But in this area, deep below the mountains, there are also vast deposits of copper, which is “the third-most-consumed industrial metal in the world”. In 2014, Ascendant Copper (later renamed Copper Mesa – the name we use throughout this case study) acquired concession rights through a dubious tender for an open-pit copper mine in Junín, a town in Intag.

25 years of resistance to mining

The communities of Intag have led, since the mid-1990s, one of the most successful resistance campaigns against mining in Latin America. For them, mining meant the risk of massive deforestation, contamination of rivers and water sources, impact on endangered species and threats to local livelihoods.

Mining has left them [communities living near mines in Peru] poorer, more humiliated. This will not happen in Intag. Polivio Pérez, farmer leader from Intag after visiting mines in Peru.

When Copper Mesa entered Intag in 2004, they did not even attempt to consult the communities and obtain their consent, a basic legal requirement for mining companies. The people and local authorities of Intag were ready to oppose this new large-scale mining project. It wouldn’t be the first time. In 1995, they had already successfully driven away Japanese corporation Bishimetals’ copper mining project – various different environmental impact assessments had confirmed that mining in Intag would lead to loss of livelihoods and deterioration of the environment.

An open-pit mine in Intag would destroy what makes the region attractive and deter long term investment… Development should not come at the expense of the fundamentals – clean water, an uncontaminated environment… and respect for the people and their decision. DECOIN, a grassroots environmental organisation in Intag.

Threats and intimidation of local communities

Because Copper Mesa knew that they would not get approval from local communities, they resorted instead to force and intimidation. The company filed lawsuits and criminal complaints against those opposing mining, including a lawsuit for one million dollars against the local community newspaper. Company-hired paramilitaries physically assaulted individuals, including children, and opened fire at community members blocking the way to the company’s mineral concessions.

A foreign investor … should not resort to recruiting and using armed men, firing guns and spraying mace at civilians, not as an accidental or isolated incident but as part of premeditated, disguised and well-funded plans to take the law into its own hands. Yet, this is what happened. Arbitrators in the Copper Mesa vs Ecuador case

In 2007, after President Rafael Correa came to power, in spite of his new government’s support for mining, the authorities ordered Copper Mesa to suspend its activities due to the company’s failure to get the Ministry of Mines’ approval for its environmental impact study and to consult with the affected local communities. Under the new mining laws of 2008-2009, those offences became sufficient grounds to terminate a concession, and Copper Mesa’s licences were thus cancelled in 2008. The company appealed to the Constitutional Court but was rejected.

ISDS arbitrators to the rescue

However, the story does not end there. The investment arbitration mechanism in the Canada-Ecuador bilateral investment treaty helped Copper Mesa to avoid financial responsibility for its own failures in this project. In 2011, the company sued Ecuador at an international tribunal for US$70 million (including future expected profits), even though Copper Mesa spent only US$28 million on the project. The company argued that Ecuador expropriated its investment unlawfully, and the changes made in mining laws violated its legitimate expectation of a stable legal environment.

The arbitrators ultimately sided with the company and ordered Ecuador to pay US$24 million. An undisclosed third-party funder will take a cut of the award. Ecuador also had to pay US$6 million in legal defence and costs of arbitration.

The arbitrators in the case found that Copper Mesa had engaged in “reckless escalation of violence… particularly with the employment of organised armed men in uniform using tear gas canisters and firing weapons at local villagers and officials”. However, they blamed the local company officers for such actions and found that senior management in Canada was merely negligent. Instead of dismissing the case as a result of this finding, they reduced the compensation by 30%.

Among all the investor-friendly interpretations in favour of Copper Mesa by the tribunal, one exposes the corporate bias of the ISDS system most clearly : the arbitrators’ ruling that the Ecuadorian government didn’t do enough to help the company deal with protesters. In the arbitrators’ upside-down world, apparently, the government should have sided with the company against its own citizens during the protest, despite the fact that States are obliged under international law to protect their citizens’ human rights. Because it didn’t support the company, arbitrators concluded that the government had not provided “full protection and security” to the investor and had not treated it “fair and equitably”, thus violating two key provisions in the Canada-Ecuador investment treaty.

[The government] should have attempted something to assist the Claimant in completing its consultations [with the community] and…the Environmental impact assessment… In the Tribunal’s view, it could not do nothing. Arbitrators in the Copper Mesa vs Ecuador case.

While investment arbitrators handed Copper Mesa a hefty reward, Canadian courts dismissed a lawsuit taken by three Ecuadorian villagers. These villagers sued Copper Mesa’s company directors and the Toronto Stock Exchange (TSX) for not having acted to prevent the armed assault perpetrated by Copper Mesa’s private security guards (mostly ex-military), against men, women and children from Junín. The lawsuit presented evidence that the company executives and the TSX had been warned about the attack and the potential for further assaults. However, ultimately Copper Mesa’s violence went unpunished, exposing once again the asymmetry in access to justice between corporations and affected communities.

Alarmingly, violent attacks on communities defending their local environment have been increasing in recent years. A Guardian headline reporting this development observes that “environmental defenders [are] being killed in record numbers globally”, and the newspaper reports that 290 activists were murdered between 2017 and 2018. Resistance to mining, along with oil, is the most dangerous activity for environmental defenders. This case thus illustrates how ISDS may “exacerbate the repression and criminalisation that human rights defenders face”. When States are faced with a choice between paying millions to multinational corporations or protecting their citizens’ rights, they might think twice about whether to side with their people given the substantial financial risks involved. Arbitrators, meanwhile, are clearly encouraging governments to let mining companies act without any restraints.

Many of the private lawyers who will decide the investor-state disputes in this report – the arbitrators – are part of a small group of commercial lawyers known as the “inner mafia” of investment arbitration. Several of them are known for investor-friendly interpretations of the law, and combine their arbitrator role with other hats – for example acting as academics, sitting on government delegations, or representing the disputing parties in investment claims as counsel, thus opening up a Pandora’s Box of conflicts of interest.

If a doctor is sponsored by Big Pharma, we are likely to question whether the medicine prescribed is the best for our health ; if a civil servant gets money from a lobbyist, we might question whether the policies they pursue are in the public interest. In the same vein, if an arbitrator’s main source of income and career path depends on corporations suing states, we should surely question the impartiality of their rulings.