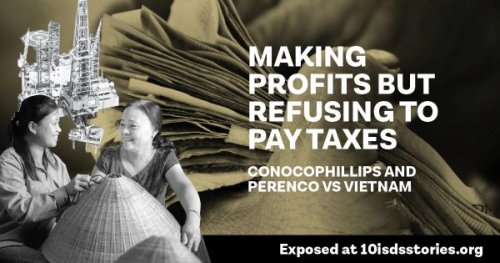 Effectively and fairly collecting taxes is essential for all states, and especially for developing countries that wish to sustainably develop. Tax collection also offers a means to guarantee quality public services for all and to collectively face the challenges of climate change. However, in Vietnam and in other countries, big corporations challenge governments that try to impose taxes on their massive profits. Investor-state dispute settlement (ISDS) is one of their main avenues to try to avoid paying taxes and to receive millions in compensation instead.

In Vietnam, multinational companies have operated in the oil sector since the 1980s. In 2012, two Vietnamese oil fields were sold by two UK subsidiaries of the US energy giant ConocoPhillips, to a UK company owned by the Anglo-French oil firm Perenco. ConocoPhillips sold the companies for US$1.29 billion, making a profit of US$896 million. But the US$896 million capital gain was never taxed.

Major international organisations – including the IMF, OECD, UN and World Bank Group – today called on governments from around the world to strengthen and increase the effectiveness of their tax systems to generate the domestic resources needed to meet the Sustainable Development Goals (SDGs). Organisation for Economic Co-operation and Development (OECD)

The government of Vietnam believes that it has the right to tax this previously untaxed gain, as it was generated by exploiting the country’s oil resources. The UK-Vietnam tax treaty also grants Vietnam this right. According to the current tax rate in Vietnam, ConocoPhillips would have to pay an estimated US$179 million to the Vietnamese government for its capital gain, money that could fund the government to build 9 hospitals. Vietnam signalled its intention to tax the transaction in 2015 through a single letter to the buyer and seller.

Fair taxation will help the Vietnamese government to cover the budget of public services, including gender-responsive services such as childcare, in turn creating more chances for women to do paid work and helping to decrease the gender gap. Hoang Phuong Thao, ActionAid Vietnam Country Director

Big oil refuses to pay taxes and demands millions instead

Both companies refuse to pay this tax. ConocoPhilips, for instance, argues that the sale was between two UK entities with no taxable presence in Vietnam, so it owes no taxes on the sale to the country. However, strikingly, ConocoPhilips did not pay any taxes on the sale in the UK either, thanks to a loophole in British tax law.

To prevent Vietnam from collecting the capital gains tax, and instead put some extra money into their pockets, ConocoPhilips and Perenco are jointly suing the Vietnamese government via ISDS. The case was filed in 2017 and is based on the UK-Vietnam bilateral investment treaty.

The right of the State to tax foreign investors… often faces limitations resulting from the broad and somewhat overstretched interpretations of provisions contained in International Investment Agreements. Daniel Uribe and Professor Manuel F. Montes, researchers at the South Centre

This case, as well as two others against India, could act as a negative precedent in Vietnam and other developing countries which are trying to levy taxes to fund poverty reduction, health, education, etc. As journalist George Turner put it when he revealed the oil industry’s “pre-emptive legal strike” on Vietnam for Finance Uncovered in 2018: “As more countries claim their resources have been bought and sold by foreigners tax-free, this issue is likely to become a new frontier in the anti-tax avoidance campaign. If Vietnam is successful, there could be profound implications for other developing countries, which have often seen Western companies make huge profits on their investments, only to walk away with them tax-free.” No wonder, Turner added, that Big Oil wants to stop such a threat “in its tracks”.

Developing countries’ experience with the outcomes of such cases does not inspire optimism, as it is well known that the panels tend to be more investor friendly and generally support the claims of firms over the rights of governments or even the human rights of their citizens. Jayati Ghosh, Professor of Economics, Jawaharlal Nehru University in New Delhi

Both ConocoPhillips and Perenco are frequent ISDS users: ConocoPhillips was awarded more than US$8.3 billion in damages against the government of Venezuela in 2019. Perenco, meanwhile, is suing the Ecuadorian government in an ISDS tribunal – the company is refusing to pay a tax on excess profits resulting from oil exploitation.

India, for example, has been sued twice for asking companies to pay capital gains tax:

A wide range of state tax measures have been challenged by giant companies through the ISDS system. The power this grants corporations to challenge progressive tax policies should concern citizens in every country that has signed up to trade and investment treaties. Claire Provost, journalist