US judge rules for Chevron in Ecuador case 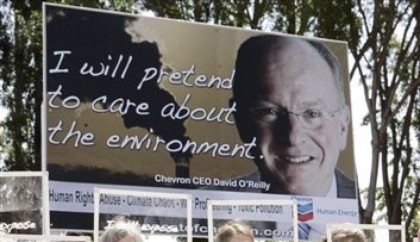 Chevron wins round in lawsuit over pollution allegations

NEW YORK, March 11 (Reuters) - Chevron Corp may pursue an international arbitration claim over environmental pollution allegations in Ecuador, a judge ruled on Thursday, part of a long-running case that carries a potential $27 billion liability for the second-largest U.S. oil company.

The government of Ecuador had asked Manhattan federal court Judge Leonard Sand to prevent Chevron from taking the 17-year-old case to arbitration under the U.S.-Ecuador Bilateral Investment Treaty.

U.S. courts had previously sent the litigation to be heard in Ecuador, where Chevron said last year that it had uncovered a $3 million bribery plot linked to the case. A lawyer for the government said Thursday’s ruling does not halt the litigation in the South American country, where a court has yet to render a judgment.

Chevron has complained of government interference in the case, in which indigenous communities accused Texaco, bought by Chevron in 2001, of damaging their health and the Amazon rain forest and causing river pollution while operating petroleum facilities in the region.

The original lawsuit was brought by farmers and residents in 1993. One of their lawyers, Jonathan Abady, said the judge’s decision means "delay but not defeat."

Sand said it would be up to the arbitrators to determine the timing and parameters of any proceeding by a tribunal, whose members have been selected but which has not yet held a hearing.

"The court finds that there is at least one arbitrable issue in Chevron’s petition," Sand said in his ruling after hearing hours of oral arguments on Wednesday and Thursday.

Last September, Chevron made the claim in U.S. District Court for arbitration under the treaty, opening a new defense of the potential $27 billion liability lawsuit. Three months later, the government of Ecuador asked the court in New York to stop Chevron from pursuing a claim that the company had been denied due process rights in Ecuador.

"Chevron is pleased that Judge Sand denied a stay and the Bilateral Investment Treaty arbitration can proceed," Chevron general counsel Hew Pate said outside the courtroom. "Chevron is seeking to hold Ecuador and its government oil company to the promise it made to complete the environmental cleanup, a promise that Texaco made to clean up and did clean up under government supervision."

A spokeswoman for the Amazon rain forest communities who sued 17 years ago said they believe the cleanup was a sham.

Lawyer Abady argued in court that Chevron’s notice for arbitration "is a wolf in sheep’s clothing to devour the litigation." He said the communities would have no standing or rights before an arbitration panel.

Chevron cited violations by Ecuador under the U.S.-Ecuador Bilateral Investment Treaty. The company said Ecuador breached the treaty by not forcing an Ecuadorean court to dismiss the environmental lawsuit.

Chevron lawyer Randy Mastro argued that the government and the plaintiffs were "acting in concert" in their hopes of receiving a multibillion-dollar judgment.

"We need a level playing field ... to decide our rights vis-a-vis the Republic of Ecuador," Mastro told the judge.