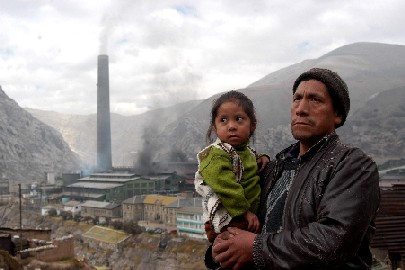 NEW YORK, Jan. 5, 2011 /PRNewswire/ — On December 29, 2010, The Renco Group, Inc., on its own behalf and on behalf of its affiliate Doe Run Peru S.R.L., served the Republic of Peru with a Notice of Intent to Commence an International Arbitration Proceeding under the Trade Promotion Agreement between the United States of America and the Republic of Peru, which entered into force between the two countries on February 1, 2009 (the "Treaty"). Renco’s complaint stems from the government of Peru’s failure to honor its legal obligations under international law, the Treaty, and the investment contract between the Republic of Peru, Doe Run Peru, and U.S. investors with respect to the substantial investment that Renco has made in La Oroya, Peru. This includes the government of Peru’s refusal to clean the soil in and around La Oroya as it legally committed and promised to do, and the government’s improper refusal to assume full responsibility for legal claims brought by certain citizens of La Oroya.

The Treaty is a bilateral free trade agreement. Its general objectives include eliminating obstacles to trade and fostering private investments in Peru by investors from the United States, as well as fostering private investments in the United States by Peruvian investors. To encourage this reciprocal investment, the Treaty provides international protection to the investors from each country. Among the protections that the Treaty guarantees are the rights to receive fair and equitable treatment, full protection and security, and compensation for expropriation. When an investor believes that it is being treated unfairly by the host country, as Renco does, the Treaty allows the investor to bring an international arbitration proceeding directly against the government of the other country to remedy the wrongdoing. And that is what Renco has put in motion by serving the Republic of Peru with the Notice of Intent to Commence an International Arbitration Proceeding. If the government of Peru does not honor its obligations or reach a negotiated settlement with Doe Run Peru and Renco within 90 days, Renco currently intends to commence a formal international arbitration proceeding against the government of Peru under the Treaty pursuant to the Arbitration Rules of the United Nations Commission on International Trade Law (UNCITRAL).

For over two decades, from 1974 to 1997, the government of Peru’s State-owned entity Empresa Minera del Centro del Peru S.A. ("Centromin") owned and operated the La Oroya Metallurgical Complex (the "Complex"). During that time, Centromin conducted its operations with little focus on the environment or the concerns of the people of La Oroya, and its operations (together with those of its predecessors) resulted in gaseous and particle emissions that impacted the soil in and around the town of La Oroya with heavy metals, including lead. In 1997, the consortium of U.S. investors purchased the Complex and thereafter transferred it to their affiliate, Doe Run Peru. As a critical inducement to encourage the U.S. investors to purchase the Complex in light of these substantial pre-existing environmental impact issues, Centromin and the Republic of Peru contractually committed themselves to clean up the town of La Oroya, and also accepted and assumed all liability for any and all claims that third parties might bring while the new owners worked to improve the Complex through environmental projects. In other words, under the terms of the investment contract, Doe Run Peru was committed to improving the Complex so that its future environmental impact was reduced, while Centromin and the government of Peru agreed to clean up the town of La Oroya and to accept liability for all potential third-party claims going forward—for the period during which Doe Run Peru would be implementing its environmental projects, and subsequent thereto. This commitment by the government of Peru is reflected in the contract of sale dated October 23, 1997.

Doe Run Peru is in compliance with its obligations to complete various environmental projects. In fact, Doe Run Peru has exceeded its contractual obligations and has made significant additional investments to improve conditions in the La Oroya community. In contrast, Centromin, its successor Activos Mineros, and the government of Peru have refused to remediate the soil in and around the town of La Oroya. They also have refused to accept responsibility for the claims brought by the citizens living in and near the town of La Oroya who claim various injuries resulting from alleged lead exposure and environmental contamination from the Complex.

The government of Peru has subjected Renco and Doe Run Peru to a pattern of unfair and inequitable treatment and has failed to afford them full protection and security, in violation of international law and the government of Peru’s obligations under its Treaty with the United States. Dennis Sadlowski, Vice President — Law, of The Renco Group stated : "We have been working very hard to engage the Peruvian authorities in negotiations to achieve a solution for the benefit of everyone concerned with this important issue. But to this point, the Peruvian authorities have refused to engage in such discussions, forcing Renco and Doe Run Peru to assert their rights by taking the first step toward the commencement of international arbitration proceedings. Nevertheless, both Renco and Doe Run Peru renew their commitment to achieving a solution to this controversy, as well as to continue investing in Peru, and contributing to the welfare of the population of La Oroya, the Central Region and the Country."