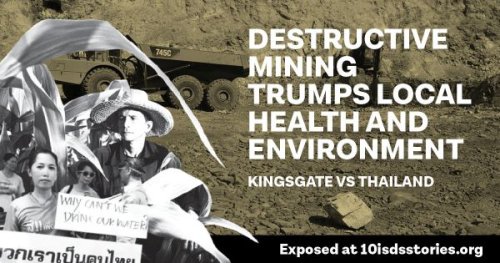 In the paddy fields of Thailand, a gold mine has been accused by locals of leaking toxic waste, causing serious health problems and ruining crops. The government responded by suspending the mine and later halting all gold mining in the country while a new mineral law was developed. Yet instead of impacted communities receiving compensation for harm caused, the opposite is happening. Since 2017, the Australian owner of the mine, Kingsgate, has been suing Thailand for millions of dollars in compensation, under a Free Trade Agreement between the two countries.

Chatree was Thailand’s first and largest gold mine and the first major project of the Australian Kingsgate mining company. The mine, which commenced operations in 2001, is situated around 280km north of Bangkok in Phichit, a district that is predominantly agricultural.

The company is in an ongoing dispute with environmentalists and locals, who say they had been negatively impacted by the mine. In 2010, villagers took the company to court for failing to mitigate damages and for obtaining mining permits illegally. The court ruled that the mine had indeed breached environmental protection laws, and ordered the company to submit an Environmental Health Impact Assessment.

Operations were later suspended at the Kingsgate mine in 2015 for several months, amidst ongoing environmental protests and medical tests found that hundreds of people living near the mine had high levels of toxic substances in their blood. The company itself acknowledged problems with dust, contaminated water, noise, and cyanide management in its own reports, and researchers criticised its “lack of true community consultation”.

Locals are deeply concerned, and in some cases fearful, of the mine’s environmental and health impacts, whether related to polluted water, dusty air or noise. Nattavud Pimpa and Timothy Moore, researchers who investigated the Chatree mine

Developments at the Kingsgate mine in Phichit also occurred after violence had erupted at another controversial mine in the country, the Loei Gold Mine, when over 300 armed, masked men attacked and beat up villagers who were blocking access to the mine. These problems in the gold sector led the military junta which was ruling the country to halt all gold mines nationwide in 2017 “due to their impact on locals and the environment”. While human rights groups welcomed the closure, the law used in the process has also been criticised, as it empowers the Prime Minister to issue any order arbitrarily without following legal and other democratic procedures.

The Australian mining company hit back with threats of a multimillion-dollar international arbitration lawsuit. This threat seemed to have paid off: in 2017 the Thai government agreed to lift the suspension on the mine’s operation, which in turn led to a steep rise in the company’s share price. Yet Kingsgate has not re-opened the mine. Instead, it has sought compensation from the government, by filing an Investor State Dispute Settlement (ISDS) case under the Thailand-Australia Free Trade Agreement claiming expropriation, seeking damages of an undisclosed amount. According to rumours in the national media, the ISDS claim could be worth US$900million, but this has been denied by the government.

Who decides the environmental and human impact of mining?

Gold is currently valued at over US$1,000 an ounce, and yet in spite of the profits which the industry can generate, the gold mining sector does not have a shining history when it comes to human rights and environmental protection. The process used to extract this expensive metal relies on cyanide, a highly toxic chemical, and creates heavy metal by-products. With production and demand rising, easily accessible gold has become scarcer and scarcer, and the waste produced from mining it is increasing.

The health and environmental impacts of the Chatree mine are at the centre of the dispute between the company, government and locals. In 2015, the Central Institute of Forensic Science of Thailand found that 282 villagers living around the mine had excessive heavy metal levels in their blood, which increased the risk of cancer, DNA abnormalities and birth defects. A subsequent independent study by academics in 2018 observed toxic waste leaking from the mine’s tailing pond. It also found abnormal electrical resistance, geochemical anomalies and heavy metal contamination levels in surface water, which supports claims by villagers that their rice fields had been polluted.

Yet the company has always denied any findings of environmental harm. Kingsgate has produced several glowing Corporate Social Responsibility reports about the Chatree mine, and has used various tactics to dispute the validity of environmental assessments; first, it challenged the scientists, then the methodology and then the link between the pollution and the mine.

While different versions of the truth are nothing new, the question of who gets to decide what is a harmful level of exposure to certain chemicals is crucial. In this ISDS case, rather than trusting national research institutes, the precautionary principle or the local community’s knowledge, the decision will be made by three investment arbitrators based on narrow investment law in a secret backroom process. Neither the details of the claim, nor how much or what type of compensation is being demanded by the company are public at this stage, and yet the arbitrators’ decision could impact the entire country through the precedent it sets for regulation in Thailand. There is a big risk that all environmental and human rights concerns will be ignored in the panel’s decision, as has happened in many other cases.

Kingsgate mining company and its investors, like most multinational companies, had ’political risk insurance’ for its operations, which covered them for financial losses related to war, expropriation and terrorism. Zurich Insurance and others in fact paid out US$58.5 million to Kingsgate for their insurance claim. Some of that money will be used to fund the ISDS arbitration case against Thailand.

This ISDS case could turn out to be the real gold mine for the struggling company – in 2018 Kingsgate faced a hostile takeover from Metal Tiger investors, due to poor management and mounting debt. While the ISDS case is ongoing, the company refuses to pay for the rehabilitation of the mine that is reported to leak toxic tailing into water sources in Phichit.

Two big questions still unanswered are: how will the environment be cleaned up, and how will locals who have suffered get help? Thanyarat Sindhornthammthat, local resident from a village in Phichit’s Thap Khlo district

Local people do not have access to insurance, nor to justice in Australian or international courts. They are, however, trying to win some justice through national courts: in 2018 the Thai courts agreed to hear a class action from 6,000 people impacted by the mine, who are demanding around US$15.9 million in compensation.

Extracting profits: how oil, gas and mining companies use ISDS

Companies in the mining, oil and gas industries are the biggest users of investor-state arbitration. They had brought 24 per cent of all known investor-state challenges by the end of 2018 (169 cases in total). The number of cases in the extractive sector is also booming in recent years, with 96 new cases launched since 2010.21

Many of these investor-state cases target attempts by governments to enact environmental and health protections for their citizens. Strikingly, also, these cases often reverse achievements resulting from resistance to resource extraction projects by affected communities. A recent study of mining-related ISDS claims against Latin American states found that over two-thirds challenged “hard-won measures that Indigenous peoples and other mining-affected communities have fought for to protect their land, water, fragile ecosystems and sacred places from mining and its harmful impacts”. ISDS is a further assault on the already weak legal protection of these communities’ rights.

Citizens and communities have no comparable legal counterweight at the international level to launch proceedings when mining company activities violate human and environmental rights. Manuel Perez-Rocha and Jen Moore, Institute for Policy Studies