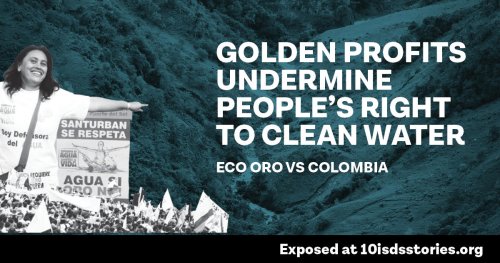 In February 2016, after massive local protests, Colombia’s Constitutional Court put the final nail in the coffin of a huge gold mining project by Canadian company Eco Oro : the court decided that no extractive activities could take place in the high-mountain ecosystems known as páramos, including the Santurban páramo where Eco Oro had its project. Less than a month later, the company told the government that it would file an investment arbitration lawsuit. Even worse, the US$764 million claim by Eco Oro seems to have triggered a whole string of investor attacks.

“Our gold is our water” and “water before gold” were key slogans of the 40,000 strong demonstration against the mining project in the páramo of Santurban which took place in February 2011 in Bucaramanga, Santander region. It was part of a long struggle by Colombians opposing large-scale gold mining and defending their right to clean drinking water.

(Mining in the páramos) is a serious abuse of natural resources and a refusal of the fundamental right to water. Colombian senator Iván Cepeda

Páramos are rare high-altitude wetland ecosystems that serve as vital sources of fresh water. Colombia’s páramos provide the country with 70 per cent of its drinking water. The Santurban páramo alone is the source of clean drinking water for two million Colombians. But hidden under these fragile ecosystems lie vast reserves of gold, coal and other minerals, the extraction of which is widely acknowledged as a “major cause of pollution of soil and water” in the country.

Canadian mining company Greystar (later renamed Eco Oro) was one of the first multinationals to acquire exploration rights for gold in Colombia in the mid-1990s. Its Angostura mining project was close to the páramo of Santurban, where exploration and feasibility operations were undertaken for several years. The fragility and ecological importance of the páramos had not yet been officially recognised by the Colombian government.

This changed in 2010 when the first laws to restrict mining in the páramos were enacted. At first, Eco Oro and other companies found ways to get exemptions from the laws, advancing their mines in what had by then become environmental preservation zones. But in 2016, the Constitutional Court struck down all exemptions to the ban on mining in protected areas. At the time, Eco Oro had not received all required permits for its operations, let alone started exploiting the gold. Moreover, in 2011, Colombia’s Ministry of Environment had even rejected the company’s impact assessment.

Environmental protection prevails over economic rights acquired by private persons… when it is proven that the activity causes harm, or when there is reason to apply the precautionary principle to avoid harm to non-renewable natural resources or to human health. Constitutional Court of Colombia

The constitutional case was a key victory during a long period of resistance by citizens, NGOs and academics, led by the Committee for the Defense of Water and the Santurbán Páramo, an umbrella organisation of 40 groups, which represents 75,000 people. For the mining industry, it was a major defeat, not least because the court had categorically declared that “public interests supersede private interests”, as one gold company later complained.

The industry fought back immediately. Eco Oro sued Colombia via the investor-state dispute settlement (ISDS) mechanism in the Canada-Colombia trade agreement, thereby bypassing Colombian courts. The lawsuit was filed in 2016 at ICSID (International Centre for Settlement of Investment Dispute), the arbitration centre of the World Bank. According to UN data, the company is claiming US$764 million in compensation – more than three times the US$250 million which it allegedly spent to develop the project.

The company argues that the measures taken by the government “destroyed the value of its investments” and frustrated its “legitimate expectations”. The reality however is that the Greystar/Eco Oro project was troubled from the beginning. The exploration phase took until 2004, with an impasse in operations from 1999 till 2003. The construction of the mine and its actual exploitation was meant to start in 2008, but it never happened. The mining site was always controversial and faced increased resistance as the years passed by. In fact, already in 2010, it seemed clear that the government would not grant the environmental license needed to proceed with the exploitation of the mine. Officials from the State Attorney General’s Office deemed that “in view of the applicable environmental and mining legislation, this is a nonviable project.”

States should not be sanctioned for protecting their water sources, given that they are doing so in accordance with national and international obligations. Carlos Lozano Acosta, Interamerican Association for Environmental Defense (AIDA)

The arbitrators who will decide the case, like in many others, are not interested in hearing those affected by the mining project. In 2019 they rejected a request from the Committee for the Defense of Water and the Santurbán Páramoand allied organisations to provide evidence on how the case could impact on human rights.

The World Bank’s conflicts of interest

A World Bank tribunal will decide whether Eco Oro’s rights have been violated. But the World Bank’s private investment division, the International Finance Corporation (IFC), was a key shareholder in Eco Oro’s mine between 2009 and 2015 before it disinvested from the project after civil society investigations proved that it had failed to consider the environmental and social impacts of the mine, a requirement for IFC investments. While financially backing the project, the Bank had claimed that mining in the páramos could “bring substantial benefits and promote sustainable development” in the region.

From a judicial perspective, there is a clear conflict of interests. It is difficult to see how in this situation an investment arbitration tribunal can make an objective and independent evaluation of the measures taken by a country to protect the public interest. Colombian lawyer Marco Velásquez-Ruiz, speaking about the World Bank’s financial support to Eco Oro

As if that wasn’t bad enough, Eco Oro’s lawsuit is bankrolled with a US$14 million cash injection from Wall Street private equity firm Tenor Capital. In exchange for a share of the final award, Tenor covers Eco Oro’s legal costs. This has not only enabled the company to file the case but will also provide the financial means to put significant extra litigious pressure on Colombia.

A flood of cases against Colombia

In 2018, two more Canadian mining companies, Red Eagle Exploration and Galway Gold, filed arbitration cases for similar reasons to Eco Oro. The cases are part of a recent flood of 11 known investor-state lawsuits which have hit Colombia between 2016 and 2018, most of them triggered by recent trade and investment treaties with Canada and the US. Until then, Colombia had not been the subject of investment arbitration attacks, but as we have seen already, one case seems to inspire more, as the word spreads among companies and highly paid investment lawyers about potential rich pickings in impoverished countries which do not have the resources to fight off attacks from multiple well-resourced companies.

How third-party funders make millions by betting on investment disputes

Third-party funding (TPF) of investment lawsuits is a growing and highly contested business. A funder – most frequently an insurance company, investment bank or hedge fund – covers the investor’s costs for lawyers and legal proceedings in exchange for a sizeable cut of the profits if the case is won. Typically, a funder will take between 30 to 50 per cent of the final award or three to four times the amount it invested. These funders mostly invest in cases when the expected outcome is at least US$14 million.

This betting on cases has proven highly lucrative. For example, take Tenor Capital, the funder of Eco Oro and Gabriel Resources’ lawsuit against Romania. This Wall Street hedge fund invested US$62.5 million in an investor lawsuit against Venezuela “in return for 70.5% of the ‘net’… award after payments to creditors and tax authorities”. Tenor hit the jackpot when Venezuela was ordered to pay out US$1.4 billion.

Likewise, in 2017, litigation funder Burford Capital cashed in more than US$100 million when Argentina was ordered to pay US$320 million in a case taken by an airline company. The fund had spent US$12.8 million to pay part of the investors’ legal fees, so Burford’s gains represent a 736 per cent return on its investment.

This type of speculative funding is likely to inflate the number of investment arbitration lawsuits being taken, as it removes the financial risk for companies of an expensive claim, making it more attractive and viable for businesses to sue.